Magic Mirror on the Wall 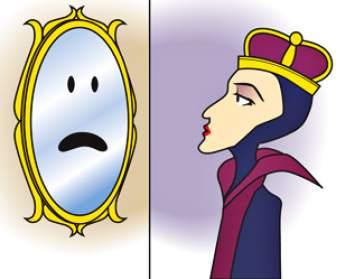 Magic mirror on the wall, who is the most creative person of them all?  Highly creative people have a number of common characteristics. What differentiates the highly creative from those who are simply creative is the intensity of these traits, as well as, the attribute of persistence. A lot of us have unusual or novel ideas, but the highly creative act on and follow through with theirs.

Here is a reflection exercise. Read through the following list of characteristics of highly creative people and rate yourself or your child on how often you think you or your child exhibits each trait: most of the time, sometimes, or rarely.

1. Displays a great deal of curiosity about many things; is constantly asking questions about anything and everything; may have broad interests in many unrelated areas.

2. Generates a large number of ideas or solutions to problems and questions; often offers unusual (“way out”), unique, clever responses.

3. Is often uninhibited in expressions of opinion; is sometimes radical and spirited in disagreement; is unusually tenacious or persistent.

4. Is willing to take risks, is often described as a “high risk taker or adventurous.”

5. Exhibits a good deal of intellectual playfulness; may frequently be caught fantasizing, daydreaming or imagining. Often wonders out loud and might be heard saying, “I wonder what would happen if. . .”; or “What if we change . . ..”

6. Has a keen sense of humor and sees comicality in situations that may not appear to be humorous to others.

7. Exhibits heightened emotional sensitivity. May be very sensitive to beauty, and visibly moved by aesthetic experiences.

8. Is frequently perceived as nonconforming; can often accept the disorder of chaotic environments or situations; is frequently not interested in details, is described as individualistic; or does not fear being classified as “different.”