My daughter recently turned twelve. I thought she was done with at-home parties, but I was wrong. She said her friends look forward every year to finding out what theme she’s going to have.  As kids get older, it is definitely harder to come up with a creative at-home party that they are going to find fun and interesting – especially when they are pre-teens.  But this year, we were successful again.

Everything is always more fun when it’s life-sized, so I decided to throw my daughter a party with some giant-size fun. I went on-line and found a giant Jenga© game, Snakes and Ladders© game, and Twister©-type game. I also wanted to include a life-size game of Sorry© but that one I had to create myself. For the game-board, I used some card-board playing spaces that were meant for decoration, some colored-construction paper, and colored playground, plastic cones.  I also created 8.5″ by 11″ game cards off the computer and laminated them. The whole game board took up our entire living room. 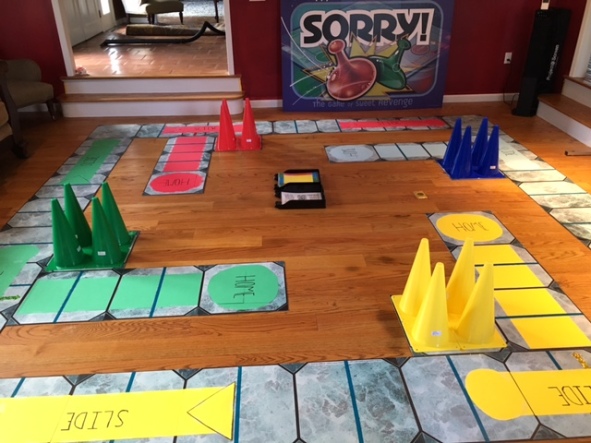 I set-up each one of these giant games in a different room, so game play rotated through
our entire first floor of our house. I had a cake decorated to look like a Twister© game board and added two bendable plastic figures to it so they looked like they were playing the game. I also used two Twister© playmats as the tablecloth where they had their pizza and cake.  In the kids’ gift bags, I included one of my RaiseCreativeKidz Make Your Own Games and a travel-sized game of Snakes and Ladders©.

My daughter and her friends really enjoyed the party. With all the different types of games and being life-sized, it kept them moving around.  For example, the Sorry© game, they had to walk over and pick up a game card and then walk to their pawn piece and move it the required spaces. For the Giant Jenga© game, even in it’s initial set-up, it was tall enough for them to have to stand to play it. So, to keep pre-teens off their phones and up and moving for two hours was a success to me.

The added benefit is that we still take out the games and reuse them on a slow Saturday afternoon or for family holiday parties. So, next time you are looking for a different type of birthday party that can keep the interest of some older kids, think about some giant sized fun! 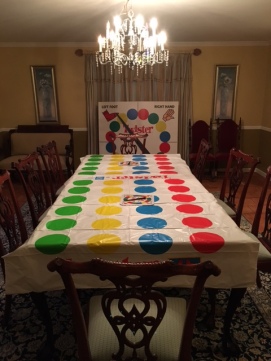