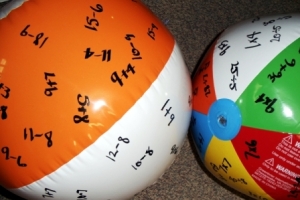 The other day, I finally got around to organizing the big pile of notebooks and folders that my children brought home at the end of the school year.  I made three piles. One pile for the school work I wanted to keep that I can look back on one day. Especially at this age when they frequently are asked to write about family since it’s a very easy and familiar topic. I’m thinking that when they become teenagers and decide they “hate” me because I won’t let them stay out past their curfew, it might be nice to pull out a stick drawing of myself and a hand written poem about how I am simply the best person in the whole wide world. The second pile is one of things that can be parted with, which is a nice way of saying thrown out. And the third pile is the huge packet of worksheets that the teachers’ wanted them to be working on over the summer so that they don’t regress.  Yeah, summer is already half over, I guess I better get on top of that.  But first, I thought I would look into this whole regression thing.  After all, we never got summer packets to work on when I was a kid. So, here’s what I found out:

Did you know that all young people experience learning losses when they do not engage in educational activities during the summer? Research spanning 100 years shows that students typically score lower on standardized tests at the end of summer vacation than they do on the same tests at the beginning of the summer (White, 1906; Heyns, 1978; Entwisle & Alexander 1992; Cooper, 1996; Downey et al, 2004).  It was also reported that most students lose about two months of grade level equivalency in mathematical computation skills over the summer months.  (Cooper, 1996).  And experts agree that children who read during the summer gain reading skills, while those who do not often slide backward. According to the authors of a November 2002 report from Johns Hopkins Center for Summer Learning: “A conservative estimate of lost instructional time is approximately two months or roughly 22 percent of the school year. It’s common for teachers to spend at least a month re-teaching material that students have forgotten over the summer. That month of re-teaching eliminates a month that could have been spent on teaching new information and skills.”

But, if your kids are anything like mine, getting them to do reading or math anytime over the summer is equivalent to torture for them.  So, I like to be creative and hide the “summer schooling” in what appears to be “summer fun”.  I started this when my kids first started school.  I took all the academic areas I wanted to review and put them into a game that we played outside.  Because I wanted them to play it with each other, I made sure that each part of the game had different academic levels to choose from.  The theme I chose for the game was “Toy Story”. I incorporated props, activities, and movement.  The more “fun” you make the game, the less they realize they are actually doing schoolwork as well.  For this particular game, I had six stations relating to six different “Toy Story” characters.  They first had to roll dice to see which station they would go to. The stations were as follows:

It’s important to finish the game with fun activities and not academics so they remember the “race to the finish line” as the most fun part. In this game, I had them balance “Toy Story” figures on rackets and then race Woody and Buzz cars to the finish line.  Here is what the set-up looked like:

Again, it’s important to have different academic levels so everyone can participate. I will show you examples of two different stations. For the BULLSEYE math station, my older children were given addition problems to solve but my preschooler was given number recognition questions. And for the JESSIE phonics station, my older children were given words where they would need to answer what letter/sound they started with and my younger child just needed to pick out letters/sounds.

As you can see, you can use anything you have around the house for the activities. My children are a few years older now, going into 3rd, 4th and 6th grade, and these Summer Schooling Fun games still work for them. I just pick whatever theme would collectively be exciting to them all, like perhaps the rage this year: “Minecraft”.  We can do building activities and there are lands and characters and props that can be utilized. I would then include appropriately higher academic levels – multiplication for math, and sentencing writing, vocabulary and spelling for english.  Again, it’s important for them to be able to play it outside and get them up and moving.  And this way, hopefully come September, they’ll be able to hit the books running.