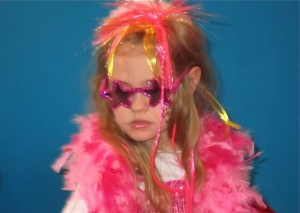 When my daughter turned 7 years old, she was very into the movie “Barbie: A Fashion Fairytale”, so I decided to throw her a Fashionista party for her birthday.  As with all my parties, I start the planning process by brainstorming on my three A’s: Activities, Ambiance and Adornments.

For Activities, I had two subsets going on. One activity was based around getting the girls glammed up for a Fashion Show and the other activity was based around Fashion Designing. All these activities were broken up into stations so that the children would have something to keep them busy at all times. For the Fashion Show, I hired a “glam squad” that would give the girls manicures and pedicures, as well as apply some makeup and face art. The group I hired to help me with that, did a great job. The chairs and equipment they brought worked well into the theme. They also helped run the fashion show, bringing boa’s, sunglasses and costume jewelry for the girls to wear, as well as a carpet runway. The only hitch I had was that the “face art” they applied, parents later told me, was tough to wash off when the girls got home – lesson learned.

For the Fashion Design activities, I had purchased blank paper doll cutouts which the children could create costumes for by drawing them with markers or by glueing on fabric or colored paper. We laid out all the supplies on the table: age-appropriate scissors, glue sticks, crayons, markers, thin fabrics that were easy to cut, and patterned colored-paper. All of the supplies, including the “paper dolls” I bought on-line at a kids’ art supply website. I also had created a few “dolls” beforehand that I left on display as examples for them to follow.  Another activity was a giant Barbie head that they could apply makeup to and fix her hair. And the third Fashion Design activity was to use fabric pieces to design an outfit on a body mannequin that I had gotten at Pier 1. I also supplied them with boa’s, belts, necklaces, and gigantic pipecleaner type fuzzy, bendable pieces that could work as belts, to use with the outfit design for the mannequin.

For Ambiance, I chose to have the party in my daughter’s room because we couldn’t get much more “Barbie Fashionista” than her all pink room with black and white fashion paintings. We also had a lot of my daughter’s Barbies around for added decoration, as well as a Barbie bedspread on her bed. We then had the Fashion Show set up in our playroom which gave us plenty of room for the runway. We had dance music on as they walked down the runway, which we showed them how to do with attitude. The cake, we had at the end of the party, set-up in the dining room which had Barbie decorations and balloons with Barbie and her friends pictured on them.

And finally for Adornments (which are those extra touches), we had purchased colored hair extensions that we put in their hair which they were able to keep and take home. We also dressed my daughter’s brothers up to look like Fashion Ken dolls. For the Fashion Show we had disco lights flashing. For the party gift, we gave each of the girls an illustrated book of the history of Barbie’s fashion throughout the years. And finally we used one of our activities as an adornment during the cake celebration, by moving the mannequin the girls had created an 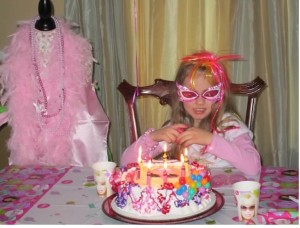 outfit for, down to the dining room at cake time. For the cake, we gave the bakery one of the Barbie decorated paper plates we were going to use, so that she could duplicate the fashion picture of Barbie with her sunglasses, as the decoration on top.

All the kids had a fabulous time and really felt like Diva Fashionistas by the end. They not only got to dress up and look and act like one in a fashion show, but they also were able to experience what it was like to be a fashion designer and actually design outfits on paper and on the mannequin. It was a very creative and fun party that she will always remember.