The Importance of Imagination 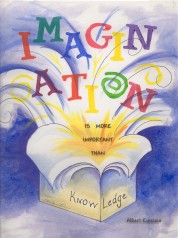 Albert Einstein said, “The true sign of intelligence is not knowledge but imagination.” Facts and figures can only take you so far if you can’t “think outside the box” and imagine different ways in which to use that information. Think about it. Where would we be without innovation? And innovation comes from our imagination, our ability to picture things that don’t currently exist in reality.

Steve Jobs didn’t mention apps, or media, or even a touchscreen when he asked his engineering team to come up with the original idea for the iPhone. Instead, his mandate, according to former iPhone product marketing manager Bob Borchers, was simple.  “Create the first phone that people would fall in love with. That’s what he told us, ” Borchers said.  How do you define what will make people fall in love with a phone? Well, you need to use your imagination.

As the lyrics in the song, “Pure Imagination”, from Willy Wonka and the Chocolate Factory, so aptly puts it:

“If you want to view paradise
Simply look around and view it
Anything you want to, do it
Wanta change the world?
There’s nothing
To it

Children who actively use their imagination reap a host of benefits, according to Dorothy Singer, professor of psychology at Yale University and co-author of The House of Make Believe: Children’s Play and the Developing Imagination.

CREATIVITY TIP: Don’t throw away those props your toddler used to use for dress-up play! I still keep a box full of props in our playroom, which includes hats, capes, swords, and any costume item that my kids can still get over their head. Because even though they no longer play “prince and princess”, just having the dress-up box around, they still dip into it. The only difference is that they’ve just advanced their story theme to play Mario Brothers, Spongebob, Ninjas, and somehow they never tire of dragging out the Toy Story outfits. They may not be able to fit into the costumes anymore but they can still slip on the Buzz Lightyear wings, and throw on Woody’s cowboy hat. This video is from when the boys were young enough that the costumes did still fit. Watching this video reminds me how magical and unadulterated imagination truly can be.