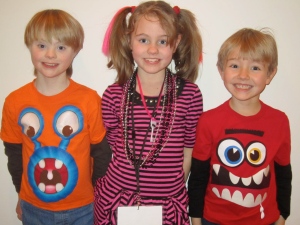 When my daughter turned 8, she was very into “Monster High” Dolls. Created by Mattel, this collection of dolls are meant to be modern-day daughters of media monster icons Frankenstein (Frankie Stein), Dracula (Draculaura), The Werewolf (Clawdeen Wolf), The Mummy (Cleo de Nile) and a Zombie (Ghoulia Yelps). They all go to high school together and have the tag line “freaky just got fabulous”. With all the movies about vampires and werewolves and t.v. shows about old storybook characters, this party theme can be used on any sort of “monster” characters that attend a modern day high school.

The premise of the party was that all the guests were attending their first day of “Monster High”. The first thing they did was to register for school and find out what their new monster identity was. They would tell the Headless Headmaster, Ms. Bloodgood, their name. She would find their name on the list, shine a blue light next to it and in invisible ink their new monster name would appear. They would then be given the registration packet that had their name on it, which I had previously prepared.  Then they followed their schedule and attended classes that had some sort of monster theme. Each classroom was a different room in our house. And we ended the party in the “Fearatorium” where we had lunch and cupcakes.

In each girl’s School Registration packet there was a folder that included a notepad, pen, a Fearbook (yearbook), their class photo, a student i.d. and a class schedule. The website for Monster High has an application where you can import your own photo and it will merge with a “monster student” in order to create a student i.d.  I used my daughter’s school class picture in order to cut-out and paste each of her friends’ faces into this student i.d. The application also generated the students new monster name. I printed out an i.d. for each guest, laminated it and put it on a lanyard so they could wear their student i.d.’s around their neck.  I also used these pictures to create the “Fearbook” (yearbook), so that they would all have a booklet of what all their friends looked like as student monsters. My daughter dressed up like one of the Monster High characters (Draculaura), my sons dressed in monster shirts, and we gave each of the girls brightly colored hair extensions that we clipped into their hair. I had the “teachers” wear wigs.

I hired two former babysitters to help take on some of the teacher roles, along with myself, my husband, and my sister. We had names like Mr Hack, Mr. Fearsome, Ms. Cackle, Ms. Gruesome, and Ms. HocusPocus. I assigned each of us a different class to teach and before the party I reviewed everyone’s roles with them and how each activity needed to go. The class schedule included: Weird Science, Grim Gym, Mad Math, Home Ick, and Dreadful Drama.

For Mad Math we used frogs with sticky tongues to catch flies. It was a game I happened to find at a local party store. Then they had to count up how many flies they caught and determine if they had more or less than the other students. For Home Ick (Home Economics), I had them take chocolate Jello Pudding and mix in gummy worms. And for Weird Science, which was a big hit, I had my husband dress up 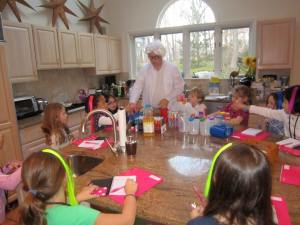 like a mad scientist, one of my sons was his helper, and we used plastic test tubes and beakers to perform different science experiments. One of the experiments was to see where the plastic spiders would end up when we mixed them into a combination of vegetable oil and water.  We also had them put food coloring into test tubes of water, combining colors to see what new colors we could make, and then they put Alka Seltzer tablets into the water to see it bubble up.

We ended the party with the birthday celebration in the Fearatorium (cafeteria). They decorated cupcakes to look like monsters. All the girls had a great time. It was a fun and creative party. When my daughter’s birthday came around again, the girls in her new class, who hadn’t gone to her party the year before, all asked her if she would have the Monster High party again because they heard it had been so much fun. But, we don’t like to repeat…