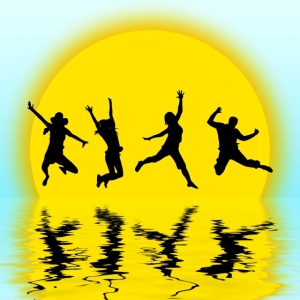 Happiness and creativity go hand in hand, find researchers at the University of North Carolina at Greensboro. The scientists randomly sampled the feelings and actions of 79 young adults over a week using automated cellphone surveys. People reported doing something creative around 20 percent of the time, and those who generally reported feeling happy and active were much more likely to be doing something creative in a given moment, such as making up their own recipes, writing, playing music or drawing. In addition, those who scored higher in openness to experience were much more likely to spend time on creative activities than others. The findings support a theory that everyday creative behavior is both a cause and an effect of feeling happy, according to the researchers (Psychology of Aesthetics, Creativity, and the Arts, online, Feb. 10, 2014).

Not only can doing something creative make your child feel happy, it can also actively change your child’s mood from a bad one to a good one.  The creative act of drawing improves children’s moods by helping to distract them, find researchers at Brooklyn College and Boston College. Scientists induced a negative mood in 83 children — 43 who were ages 6 to 8 and 40 who were ages 10 to 12 — by having them recall a disappointing episode in their lives. Then, the youngsters drew either a scene related to the disappointing episode (the venting condition) or a neutral scene unrelated to it (the distraction condition). The children rated their moods both before and after the drawing activity. The researchers found that the children’s short-term moods improved more in the distraction condition than in the venting condition. The researchers also examined whether distraction would have a stronger effect for younger than older children, given that younger kids report that they enjoy drawing more and see themselves as drawing more competently than older children. However, the “distraction” effect applied equally to both younger and older children, the team found (Cognition and Emotion, April 2013).  So, next time your child has a bad day at school, try to help him turn his mood around by taking out a box of crayons.