When I was a marketing executive, my main goal was to design material that was visually appealing enough to make the client want to pick it up and use it. I use the same philosophy when it comes to putting together games for the kids. And to be visually appealing to kids means big and colorful.  I keep a large plastic tub full of activity cones, spot markers, bean bag throws, colored balls of various size, and a pop-up tunnel. You can use these items in any number of physical games or fill up a lazy afternoon with an obstacle course.

One of the things I like to do for the kids, that satisfies my creative side as well as rate high on my kids’ fun-meter, is to come up with jumbo size games. The “Matching Game”

becomes infinitely more entertaining when it becomes life-size. When my kids were into dinosaurs, I went to the internet and printed out duplicates of all the different types of species. Each 8 1/2″ by 11″ sheet was of a particular character. I then printed out a “Dinosaur” logo and made as many copies of that sheet as I had of my duplicate dinosaurs. I glued a logo sheet and a dinosaur character sheet together, with the blank sides of the pictures facing in.  Using self-laminating folder sheets, I was able to enclose each “card” in plastic, making them more durable. I set the game up in rows on our living room rug, the logo-side of the cards facing up. The game covered most of the rug area. My kids then took turns flipping over two cards at a time to see if they had matching dinosaurs. If they didn’t have a match they would flip them back over and let the next child go. In order to reach all the cards they had to get up and move around to get from one side to another, making it much more active than your regular-sized, table-top matching game.

Another similar-type of game, I used characters from their favorite movie. I printed out a duplicate set of each character, but one was a larger 8 1/2″ by 11″, sheet 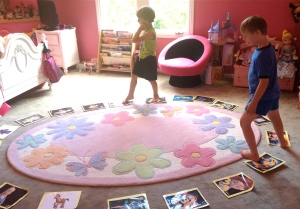 and the other was a smaller 2″ by 3″ sheet. I then cut around the edges a little and pasted them onto colored card stock sheets. This gave each picture a colored border just for added effect. And then I once again used the self-laminating folder sheets to enclose them in plastic.  I set the large “cards up in a big circle, and then shuffled the smaller cards and put them face down. I then had them play my version of board-game musical chairs. Each child would choose a picture to stand on. I would then play music and they would advance around the circle from picture to picture until I stopped the music. When I stopped the music I would reveal the next card from my face-down pack of smaller cards. If anyone was standing on the matching character of the card I revealed then they would be out of the game. Whichever card came up, whether someone was standing on it or not, would be taken out of the game as the circle got smaller. Whoever was the last one still standing on a character on the circle would win. I resurrect these cards every once in awhile when the kids get bored, or if I am trying to get over the guilt of knowingly allowing them to play all morning on the X-box, and they are always excited to play it again.

THE BIGGER THE BETTER

I also find that using super-sized material during learning time, makes education more palatable as well. In trying to reinforce the concepts of money that they are being taught in 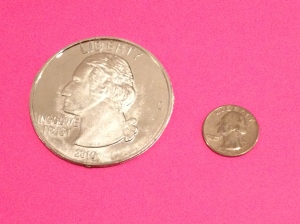 school, I use large sized play coins. Whether playing store, or bank, or around here – investment banker, they love using the big coins in place of regular-sized money. We also use it in playing money counting games. I also like to use super-sized dice. My favorite are the large size soft cubes that are just white and have plastic sleeves on each side that you can print out pictures and put them in each sleeve, creating your own personalized die. Then the types of life-size board games you can create are endless. And of course, the over-sized play clocks when you’re reviewing how to tell time.

My motto is bigger is better. And size does matter. So, if you’re trying to make that old game of chutes and ladders new again, put the board or “bored” away, and super-size it to reenergize your kids imagination and pump up the physical activity level.